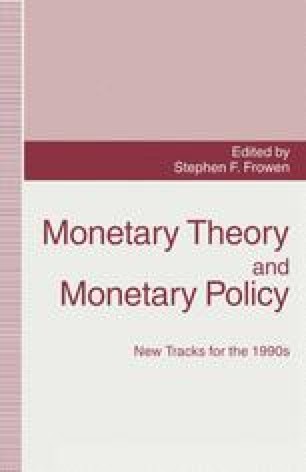 Comments on Monetary Theory and Monetary Policy: New Tracks for the 1990s

I welcome this opportunity to share my thoughts with some of the leading scholars in monetary economics, all the more so, because I feel that communication between monetary theory and monetary policy has not been very intensive in the past ten to fifteen years. The last period of discussion I recall was in the late 1960s and early 1970s when issues such as fixed versus flexible exchange rates were discussed, which subsequently led to floating, the introduction of monetary targeting, and medium-term orientation of monetary policies by some of the major central banks. Meanwhile, this targeting of monetary aggregates has lost in significance; some central banks still use it as an indicator, though; and everybody is back to square one — as Fritz Machlup used to put it — that is to say, they are back to a more or less pragmatic approach depending on the events of the day, de-emphasising the medium- or long-term perspective. In other words, stabilisation of interest rates and/or exchange rates seems to be back in fashion, at least for the time being. This is not the fault of economics, nor is it the fault of central bankers. It is simply due to the fact that the world has changed. I am not sure whether all central banks have recognised this fact, but I am certain that economic theory has not come up with operational answers to this brave new financial world.

Monetary Policy Financial Market Central Bank Flexible Exchange Rate Monetary Economist
These keywords were added by machine and not by the authors. This process is experimental and the keywords may be updated as the learning algorithm improves.
This is a preview of subscription content, log in to check access.