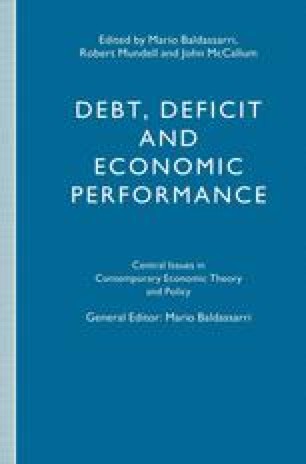 Just as the ultimate impact of changes in taxes with a macroeconomic impact, such as the corporate income tax, cannot be determined without considering the concomitant changes in fiscal and monetary policies that could be expected, so the impact of changes in national debt resulting from deficits cannot be determined withoret looking into the tax structure that is likely to be involved in ultimately paying off the debt. Indeed fairly drastic differences in the impact of government debt will result from what may appear to be minor changes in the tax structure.

Monetary Policy Public Debt Government Debt Debt Finance Inflationary Condition
These keywords were added by machine and not by the authors. This process is experimental and the keywords may be updated as the learning algorithm improves.
This is a preview of subscription content, log in to check access.