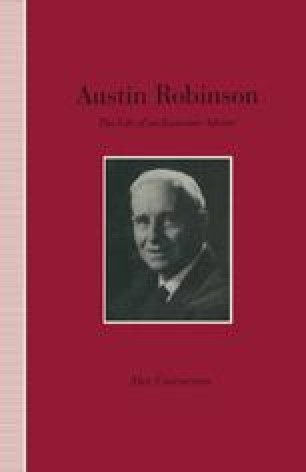 The Austin Robinson so far presented has been very much an institutional figure, serving this or that government department, the ‘slave’ of the Royal Economic Society, the founder or mainstay of professional organisations, the promoter of contact and debate between economists across international frontiers. He has not appeared, except in his earliest writing, as a contributor to economic theory. He founded no school, expounded no abstract doctrines peculiar to himself, and indeed appeared to avoid general theory as such. From the war onwards, although he was a prolific writer of reviews, articles and introductions, he wrote nothing at book length to drive home his approach to economic problems.

World Trade Indian Subcontinent Agricultural Output Domestic Saving Support Price
These keywords were added by machine and not by the authors. This process is experimental and the keywords may be updated as the learning algorithm improves.
This is a preview of subscription content, log in to check access.