The Pathology of the U.S. Economy 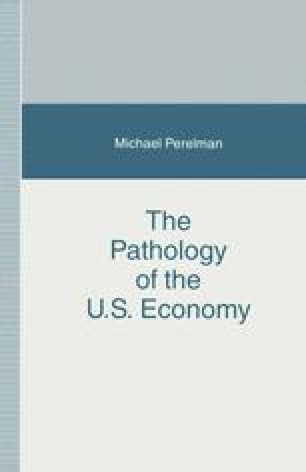 The Role of the Military in the Economic Decline

In contrast to the curtailment of public investment in productive infrastructure, the military has continued to grow by leaps and bounds since the Camelot days of the Kennedy administration. Today, the extent of military spending in the United States today is almost incomprehensible. By 1990, the Military Industrial Complex was employing about 6.5 million military and civilian personnel — about 1 of every 10 workers — in more than 135,000 factories (Melman and Dumas 1990). According to the conservative estimates of the Office of Management and Budget, national defence made up 26 per cent of the fiscal 1990 budget.

Fiscal Policy Government Spending Social Program Military Spending Economic Decline
These keywords were added by machine and not by the authors. This process is experimental and the keywords may be updated as the learning algorithm improves.
This is a preview of subscription content, log in to check access.