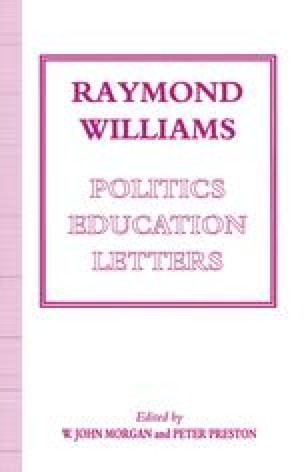 Contributions to the Long Revolution: Raymond Williams and the Politics of the Postwar New Left

In recent months, as I have been rereading and writing about Raymond Williams, I have often been asked by friends — mostly students and activists in their twenties and thirties — why I would spend my energies in these politically urgent times trying to extend the project of a socialist thinker of the last generation. For readers among the British left, this question will no doubt seem ill-informed and inappropriate: it is enough to say that, at his death in January 1988, Raymond Williams was probably the most influential socialist theorist in the English-speaking world; certainly the most influential to emerge from the postwar New Left. But my euphoric friends in Hungary and Czechoslovakia will not be satisfied by this: having participated in the great popular revolution of our time, in the process now of freeing themselves from the ossified forms of an authoritarian system that justified itself in the name of socialism, they want to know why we, or they, should be thinking in the 1990s about the extension and renewal of any socialist project. Oddly enough, I face the same questions from friends and colleagues in the USA — many of them committed activists in the peace, ecology, and feminist movements: they tell me there is too much urgent political work to be done for us to be searching through the remnants of an anachronistic political movement, no matter how eloquent its intellectuals.

Labour Movement Cultural Revolution Labour Party Common Culture Socialist Project
These keywords were added by machine and not by the authors. This process is experimental and the keywords may be updated as the learning algorithm improves.
This is a preview of subscription content, log in to check access.