The Politics of Style in the Fiction of Balzac, Beckett and Cortázar 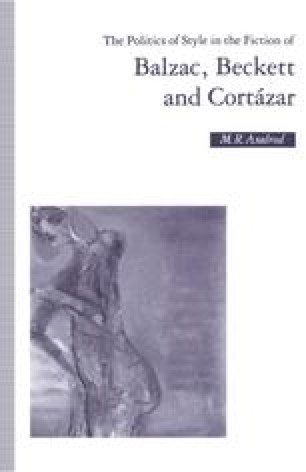 The Politics of Style in the Fiction of Balzac, Beckett and Cortázar pp 13-28 | Cite as

Simple-sentence discourse and formulaic repetitions are not merely products of the compositional whims of contemporary, non-fictional prose nor of contemporary, commercial, genre fiction. A sentence, taken out of a larger context, tends to be rather passive, but, in collaboration with other, similarly constructed sentences, it constitutes part of a larger politext. In other words, the way a text is constructed lends itself to a particular way of viewing the world. Scottian discourse (as well as Balzacian fictional discourse), for example, often uses descriptive terms which merely depict the surfaces of things without an extensive use of imaginative phrasing. It appears that this kind of discourse precludes anything approaching the Symbolist notion of synaesthesia, of writing that dramatizes the senses in ‘unordinary’ ways, and that, to large measure, remains today. In other words, sparseness of imagistic language, lack of original metaphor (or unoriginal one for that matter), absence of dynamic figures of speech, and an adherence to formulaic structures, seem to be the writing of preference, the style of preference, the context of preference, in much of contemporary fiction simply because it, the appearance, is familiar and, as Lyotard has written, the audience derives a certain amount of comfort from that.

Literary Text Flush Toilet Literary Discourse Textual Invention Realistic Fiction
These keywords were added by machine and not by the authors. This process is experimental and the keywords may be updated as the learning algorithm improves.
This is a preview of subscription content, log in to check access.