A Handbook to English Romanticism 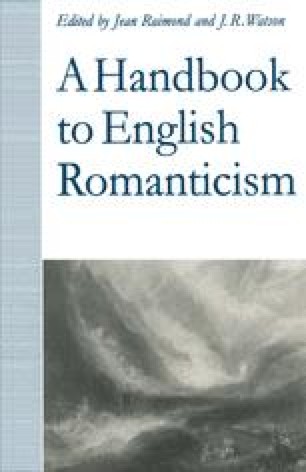 A Handbook to English Romanticism pp 19-31 | Cite as

Blake was born in 1757 to a hosier and apprenticed at fifteen to the engraver James Basire, for whom he made drawings at Westminster Abbey, thereby acquiring a taste for the Gothic. In 1780 he witnessed the Gordon Riots and the burning of Newgate Prison. He married Catherine Boucher in 1782, and the following year his Poetical Sketches were printed at the expense of John Flaxman and the Revd, A. S. Mathew but not published. He opened a print shop in partnership the following year. In 1789 he and his wife attended the first London meeting of the Swedenborgian New Church, and he engraved Thel and The Songs of Innocence. The French Revolution was set in type but never published, and by March 1791 the poet had moved across the Thames to 13 Hercules Buildings, Lambeth. In 1793, when Louis XVI was executed and war declared between Britain and France, Blake engraved America and The Visions of the Daughters of Albion. By this time he was clearly distressed at the course of the French Revolution and wrote in his notebook, ‘I say I shan’t live five years, and if I live one it will be a wonder.’ 1794 saw the publication of the combined volume The Songs of Innocence and of Experience, of Europe and of The First Book of Urizen.

French Revolution Title Page Combine Volume Paradise Lost Print Shop
These keywords were added by machine and not by the authors. This process is experimental and the keywords may be updated as the learning algorithm improves.
This is a preview of subscription content, log in to check access.