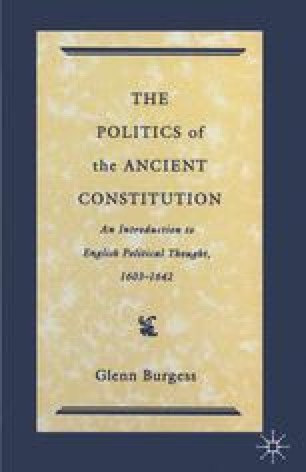 The Politics of the Ancient Constitution pp 109-114 | Cite as

Though the common law provided early Stuart Englishmen with what was probably their fundamental set of assumptions and concepts for thinking and talking about politics, even a cursory glance at the period would make it apparent that there were other competing theoretical modes available. If we wish to understand the political debates of the pre-Civil-War period it is not enough to understand ancient constitutionalism alone. It is also necessary to understand how ancient constitutionalism compared with other ways of thinking about politics, and how these rival languages of political discourse interacted with one another.