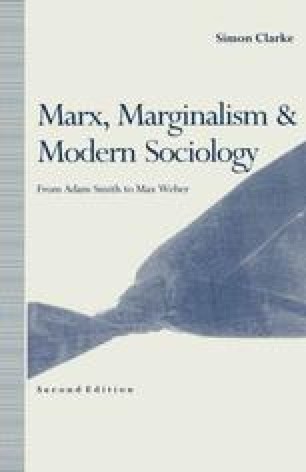 Value, Class and the Theory of Society

Despite Marx’s proclamation of the death of philosophy in his early works, his critique of political economy in those works remained essentially an extrinsic philosophical critique in the sense that it ultimately rested on an appeal to abstract categories of ‘human nature’, ‘history’ and ‘society’. In Capital, by contrast, Marx abandoned such abstract categories, developing an analysis of capitalism as a form of social production which developed historically through the interaction of ‘individuals, not as they may appear in their own or other people’s imagination, but as they really are; i.e., as they operate, produce materially, and hence as they work under definite material limits, presuppositions and conditions independent of their will’ (GI, pp. 36–7).

Political Economy Social Relation Private Property Social Form Capitalist Production
These keywords were added by machine and not by the authors. This process is experimental and the keywords may be updated as the learning algorithm improves.
This is a preview of subscription content, log in to check access.