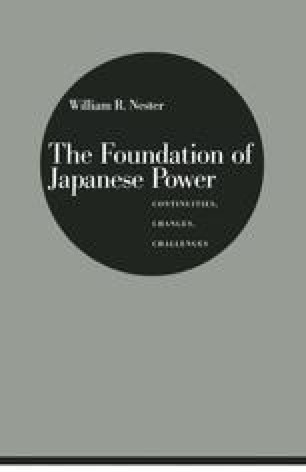 In the 1980s Japanese corporations rapidly surpassed their rivals in other democratic industrial states to dominate international business. In 1987 Japanese corporations included 15 of the world’s 20 largest corporations, and 315 of the world’s top 1000 firms. The combined assets of those Japanese firms represented 48 per cent of the total assets of the world’s top 1000 firms. In comparison, American firms numbered 345 but held only 32 per cent of the total assets.1 The world’s ten biggest banks, and 17 of the largest 25 banks are Japanese. The combined assets of those leading Japanese banks in 1987 was $1.4 trillion, more than twice the $630 billion assets of the American banks, the largest of which, Citicorp, was only number 27 in the world.2 It is this huge financial power that allowed Japan to replace the United States as the world’s banker in 1985. With foreign reserves of $88.9 billion and net foreign assets of $250 billion in 1988, Japan is now the financial superpower while the United States owes over $450 billion to foreign creditors. Dozens of Japanese corporations like Toyota, Sumitomo, Hitachi, and Sony have become household names throughout the globe from America to Zambia. Countless foreign corporations are studying and trying to implement such Japanese management techniques as ‘lifetime employment’, ‘just-in-time inventory’, or the bonus system. A 1987 US Academy of Engineering Report revealed that Japan led in 25 of 34 technologies identified as vital to a post-industrial society.3

Japanese Firm Trading Company Corporate World Trading Firm Japanese Corporation
These keywords were added by machine and not by the authors. This process is experimental and the keywords may be updated as the learning algorithm improves.
This is a preview of subscription content, log in to check access.