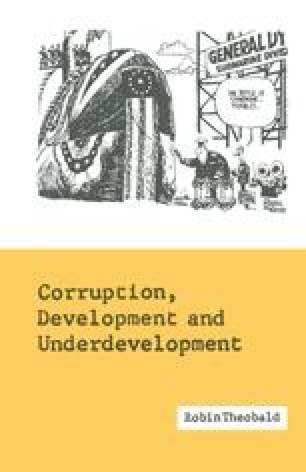 It would be very convenient if we could start off with a neat definition of corruption and proceed to spend the rest of the book looking at actual examples in some detail. But corruption, like many other forms of behaviour when placed under the scrutiny of the social science lens, proves to be an elusive and complex phenomenon: in fact the more one examines it the more difficult it becomes to separate corruption from other forms of social exchange. The task of definition is not made easier by the fact that corruption, by its very nature, is inseparable from questions of public morality and morality in general. This has sometimes excited a tendency to condemn which has impeded objective analysis. It is perhaps not surprising, therefore, that some writers whilst dealing with the phenomenon in some detail have deliberately avoided defining it (see, for example, Williams, 1987). My feeling, however, is that an attempt at definition should be made not simply out of the primordial academic need to demarcate, to classify or to pigeon-hole, but because, I suggest, the enterprise itself helps us to tease out the essential characteristics of the phenomenon under discussion.

Public Interest Public Office Political Corruption Modern Industrial Society Pentecostal Church
These keywords were added by machine and not by the authors. This process is experimental and the keywords may be updated as the learning algorithm improves.

MOSCA: But what, sir if they ask

VOLPONE: Say it was corrupted.

MOSCA: I’ll say it stunk, sir; and was fain t’have it

Coffined up instantly and sent away.