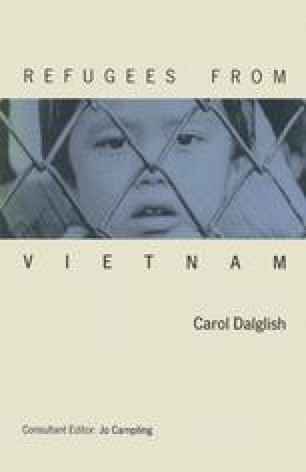 The refugees from Vietnam represent the most drastic of refugee situations. They did not, as many refugees do, travel from one side of a border to another to await conditions in their own country becoming more acceptable. They left without any knowledge of where they were going or when, if ever, they would return. They were received by countries as distant as Canada and Australia, Sweden and the United Kingdom. Some even found their way to South America and parts of Africa. Their flight received enormous media coverage which appears to have affected the inhabitants, if not the governments, of many receiving countries.

Language Ability Reception Centre Voluntary Agency Family Reunion English Ability
These keywords were added by machine and not by the authors. This process is experimental and the keywords may be updated as the learning algorithm improves.
This is a preview of subscription content, log in to check access.