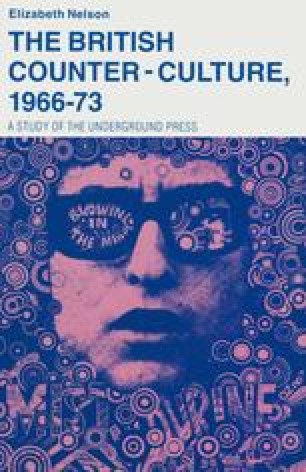 Proclaiming the Counter-Culture: the World of It, Oz and Friends

It may be seen from the previous chapter that certain activities and an atmosphere conducive to the ‘arrival’ of the counterculture in England were present before 1966. But in October 1966 the launching of International Times — the first underground publication in England — signalled the formal arrival of the counter-culture. The launching was celebrated by a ‘launch party’ which was avidly reported in the second issue of the paper.1 According to the report, the occasion was attended by 2500 dancing people. ‘Famous people’ in attendance included film director Antonioni and his leading lady Monica Vitti, Beatle Paul McCartney disguised as an Arab, Beat writer Kenneth Rexroth and others. Also in attendance it was noted, were ‘a well-known junkie, a notorious homosexual, and many happy people who were only known to their friends but who the hell cares in a scene like that anyway?’. Not that everything went well, however: people were reported as ‘wondering what the hell was going on’; somebody appeared to be about to become violent, there was the sound of bottles breaking, the communal toilet flooded, and a ‘giant jelly made in a bath was unfortunately run over by a bicycle’.2 A mixture of fun and confusion, clearly.

Final Issue International Time Underground Press Founding Editor Underground Publication
These keywords were added by machine and not by the authors. This process is experimental and the keywords may be updated as the learning algorithm improves.
This is a preview of subscription content, log in to check access.