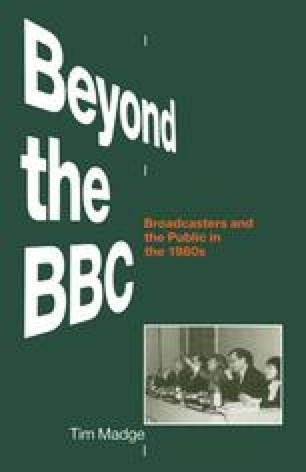 Beyond the BBC is the end product of a two and a half-year research project — the BARRTA project. BARRTA (Broadcasters and Accountability: Responsiveness and Responsibilities Towards Audiences) started out from comments made in the Annan Committee Report about the broadcasting advisory councils. Among other things the Report said there had been widespread concern expressed by various bodies giving evidence, including the advisory councils themselves, about the role they played inside or on the fringes of broadcasting. Annan concluded that one of the weaknesses of the present general advisory structure is that it is remote from most members of the audience.

Advisory Council Council Member Broadcasting System Public Service Broadcasting Nuclear Disarmament
These keywords were added by machine and not by the authors. This process is experimental and the keywords may be updated as the learning algorithm improves.
This is a preview of subscription content, log in to check access.