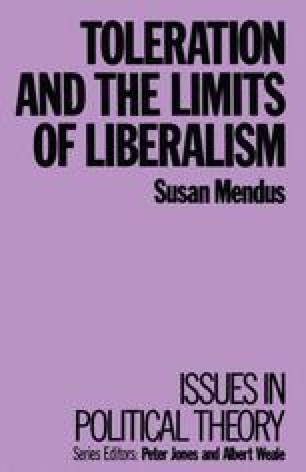 Toleration and the Limits of Liberalism pp 1-21 | Cite as

The Concept of Toleration

In modern society, problems of toleration arise most often and most obviously in connection with racial, religious or sexual matters: in Britain, the Brixton disorders of 1981 were held to be both a symptom and a consequence of a deeply embedded racial intolerance. Reporting on the disorders, Lord Scarman remarked; ‘All the evidence I have received, both on the subject of racial disadvantage and more generally, suggests that racialism and discrimination against black people — often hidden, sometimes unconscious — remain a major source of social tension and conflict’ (Scarman, 1986, p.172). Racial intolerance and discrimination, whilst not identified as the direct cause of disorder, were held to be important social conditions serving to create a disposition towards violent protest of the sort which flared in Brixton on the weekend of 10–12 April 1981. Members of the black community attributed their poverty and deprivation to racial discrimination and, as Scarman puts it; ‘once you have deprivation and once minorities perceive that they are at the end of every queue, then race heats up the furnace of anger to an unbearable temperature’ (pp.xiv–xv).

‘I hate him for he is a Christian.’ (Merchant of Venice, Act I, Scene III)