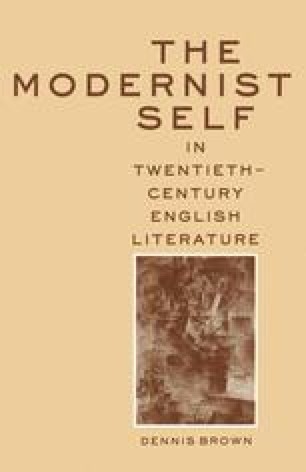 Self-deception and self-conflict have always been major themes in literature — some might say the major themes. Oedipus and Don Quixote, Lear, Arsinoé, Philip Pirrip and Willie Loman — all are, in important senses, self-deceivers whose inauthenticity generates conflict within. But the Modernist project of fragmenting selfhood enormously complicates the issues involved in these themes. If selfhood is fragmentary rather than coherent, we are beyond the mere paradoxicality of the lie in the self, and the question of the relationship between self-parts and the possibility of self-acknowledgement becomes acutely problematic. In the first place, Modernism writes self-deception as the banal norm rather than the spectacular (and heroic) exception. If fragmentation is a reality of experience then self-deception can never be finally evaded. Thus there is no instance when, for instance, Prufrock or Mauberley or Bloom or Gerald Critch see themselves quite clearly — as Oedipus or Dickens’s Pip are represented as doing. Further, because awareness of fragmentariness is bound up with the relativities of language, there is no final formulation that might articulate full self-recognition. Where Oedipus can claim ‘Everything has come to light’ and spell out, in anguish, what he has been, the Modernist protagonist (or subject) is prone to testify, in bewilderment, the mismatch between experience and words: ‘It is impossible to say just what I mean!’

Gold Thread Important Sens Marble Order Lapis Lazuli Notorious Phrase
These keywords were added by machine and not by the authors. This process is experimental and the keywords may be updated as the learning algorithm improves.
This is a preview of subscription content, log in to check access.