Women’s Employment and Multinationals in Europe 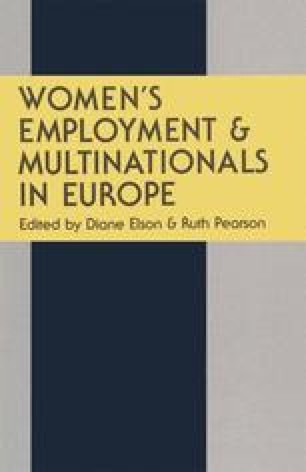 Discussion about the impact of multinationals on the consciousness and organisation of women workers in Ireland1 tends to be characterised by three basic features. First, there is an implicit assumption of voluntarism: thus, for example, questions about women’s motives in working for foreign-owned firms and comments about their political myopia presuppose a possibility of choice which may be absent from the women’s actual situation. Second, insofar as a model of employment conditions in multinationals within Third World countries forms the basis for such discussions (see, for example, Barry and Jackson, 1984), there tends to be an automatic assumption of dissatisfaction on the part of women working for multinationals in semi-peripheral European countries such as Ireland. Finally, there is the optimistic assumption that women’s entry into paid employment automatically leads to their radicalisation through their very presence outside the home (MacCurtain and Ó Corráin, 1978); and/or through some magical raising of collective consciousness of the wrongs against their sex and class (undifferentiated) (Sinn Féin The Workers’ Party, 1977).

Trade Union Migrant Worker Foreign Firm Shop Floor Multinational Firm
These keywords were added by machine and not by the authors. This process is experimental and the keywords may be updated as the learning algorithm improves.
This is a preview of subscription content, log in to check access.