Virginia Woolf: The Frames of Art and Life 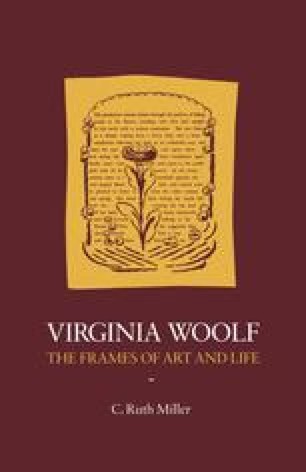 The number of references to rooms and windows in Virginia Woolf’s writings has prompted several critics to comment on their role as symbols of consciousness and perception.1 Yet rooms and windows, together with mirrors and thresholds, also serve other purposes; notably, they draw attention to the artifice of the works in which they appear. A precedent for this strategy was set in the visual arts: the practice of portraying a door or a window within a painting is well established.2 It is a self-conscious device, since the doors and windows can be seen as framing the scene they enclose just as they are framed by the borders of the painting. The conspicuous boundaries of the inside frames suggest that the outside frames are similarly restricted.3 Virginia Woolf’s desire to expose such limitations may be related to her sense of herself as an outsider. In her diary, she maintains that it is her ‘outsider’s vision’ which enables her to see things ‘composed & in perspective’ (D2, p. 55). An outsider’s alienation is counterbalanced by his increased self-awareness; he can see the frame as well as the scene it encloses. The frames in Virginia Woolf’s writings encourage the reader to become an outsider as well.

Present Moment Open Door Dine Room Perpetual Movement Empty Room
These keywords were added by machine and not by the authors. This process is experimental and the keywords may be updated as the learning algorithm improves.
This is a preview of subscription content, log in to check access.