Yeats and Politics in the 1930s 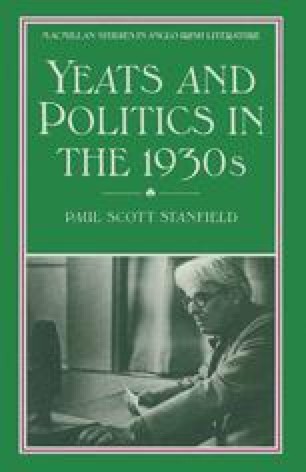 To study the closing decade of Yeats’s career by examining the political causes he embraced and the political questions he addressed may seem to narrow unjustifiably the wide field over which his interest ranged in those years: his fascination with Indian religion and collaboration with Shri Purohit Swami, his renewed interest in sexual love, his attempt to make his poems as simple and profound as folk ballads. In that highly political decade, however, even interests as near to Yeats as his work with the Swami, his reawakened sexuality, and poetry itself often either defined themselves by their contrast to politics, or created a space for themselves by fending off politics.

Political Question Indian Religion Efficient Rule Heroic Poetry Modern Verse
These keywords were added by machine and not by the authors. This process is experimental and the keywords may be updated as the learning algorithm improves.
This is a preview of subscription content, log in to check access.