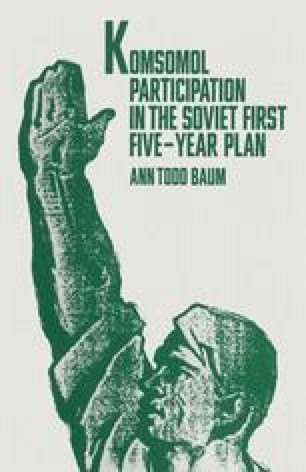 From Militarization to Industrialization

In 1927 Komsomolites were steeped in military discipline, and responded eagerly to Stalin’s appeal for ‘soldiers’ in the drive for rapid modernization. Some older members had combat experience from participation in the revolution as well as the civil war. The League had thus far been instrumental in organizing political education groups within the armed forces, and had been conspicuously present on the battle fronts. So intense was Komsomol attention to national defense that by the beginning of the First Five-Year Plan military jargon dominated its rhetoric and action. Stalin took advantage of this fighting tradition and urged the Komsomol to wage full-scale war on any form of opposition to his goals. Every aspect of the First Five-Year Plan became a battle front.

Sport Club Military Training Rapid Industrialization Youth League Rapid Modernization
These keywords were added by machine and not by the authors. This process is experimental and the keywords may be updated as the learning algorithm improves.
This is a preview of subscription content, log in to check access.