The Critical Writings of Katherine Mansfield 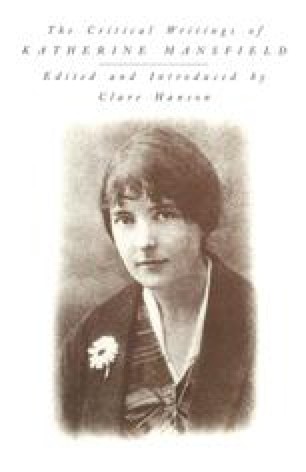 The Critical Writings of Katherine Mansfield pp 21-32 | Cite as

Katherine Mansfield first met John Middleton Murry in December 1911. In April 1912 she became assistant editor of Rhythm, a quarterly magazine of the arts founded by Murry and Michael Sadleir, which had first appeared in June 1911. Murry and KM wrote the following two articles jointly for Rhythm. Both for Murry as critic and for KM as creative artist, these articles represent a first positive manifesto (KM had satirised writers such as Bennett and Wells for the New Age magazine, but had not suggested any new alternative method or stance for the artist). Murry was very much influenced at this time by the philosophy of Henri Bergson (1859–1941), and, starting from Bergson’s initial descriptions of the artist as possessing pre-eminently the power of intuition, developed a romantic idea of the artist as a ‘seeker’, forging ahead of ordinary men — the artist’s vision is thus ‘a moment’s lifting of the veil’ (‘Art and Philosophy’, Rhythm, no. 1). This romantic view of the artist was substantially that of KM, though her idealism was later qualified by a sharp, ironic wit which seems to have been quite out of Murry’ s range. ‘The Meaning of Rhythm’ (Rhythm, no. 5) and ‘Seriousness in Art’ (Rhythm, no. 6) have a youthful fervour as if KM in particular has been momentarily caught off guard. It is fairly clear that, while the phrasing of the metaphysic of these essays comes largely from Murry, the imagery is KM’s.

Creative Artist Critical Writing Areal Sense Romantic Idea Supreme Reality
These keywords were added by machine and not by the authors. This process is experimental and the keywords may be updated as the learning algorithm improves.
This is a preview of subscription content, log in to check access.