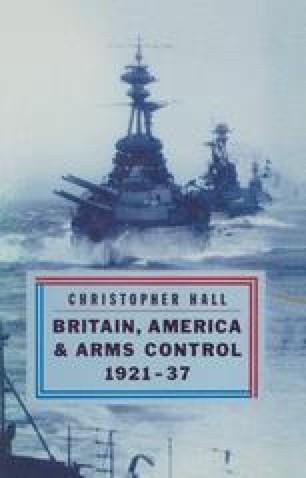 The End in Europe

If 1934 was, in terms of the preoccupations of British diplomacy, the year of Japan, then 1935 was the year of Europe. The reasons for this pre-occupation were threefold. First, although Japan had finally renounced the treaty limitations upon her in the Far East, before she could be confronted it was necessary to reduce the dangers in Europe. Secondly, the threat from a resurgent Germany in Europe grew to justify the worst fears of the British Government. During 1935 Britain’s air ‘deterrent’ in Europe was overhauled and neutralised by German air strength, thus ending the idea that security could be provided at low cost by such a policy. Thirdly, in the Mediterranean, Italy emerged as a major threat to the security of the British Empire, as Mussolini’s invasion of Abyssinia and the reaction of the Western Powers drove her into the camp of the ‘revisionist’ vowers.

Quantitative Limitation Building Programme Defence Requirement Programme Declaration Aircraft Carrier
These keywords were added by machine and not by the authors. This process is experimental and the keywords may be updated as the learning algorithm improves.
This is a preview of subscription content, log in to check access.