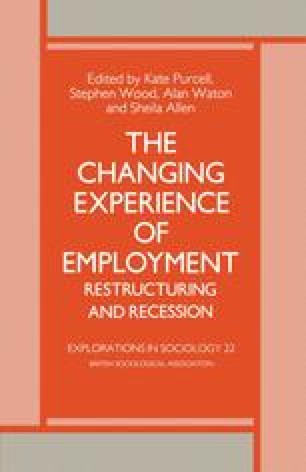 The Changing Experience of Employment pp 156-172 | Cite as

The effects of the economic recession and organisational restructuring on working conditions have been significant since the mid-1970s in West Germany as in other Western countries. In particular, the new microelectronic information technologies have proved to be powerful instruments for the rationalisation of work. Employee resistance has been minimal and this widespread acquiescence is surprising in the face of such drastic restructuring of the labour process. In terms of macro-level analysis which focuses on the structural features of society, why do large groups of wage workers apparently not act according to the interests derived from their class position? The micro-level of group behaviour and individual action attuned to the social system inside the firm to which radical writers in the USA and Great Britain are increasingly returning, has largely been omitted in the critical (structural Marxist) debate in Germany. A major theme of this chapter will be the need to reinstate it as crucial to an understanding of class and employment relations.

Organisational Change Technical Change Work Rationalisation Labour Process Economic Recession
These keywords were added by machine and not by the authors. This process is experimental and the keywords may be updated as the learning algorithm improves.

The paper is based on research carried out by the sociological research group (Industrieangestellte) at the University of Bremen, with special thanks to Ulrich Heisig for joint efforts in development of an interpretive framework. The support through grants from the German Research Council (DFG) and the University of Bremen are gratefully acknowledged. Thanks also to the Institute of Industrial Relations at the University of California, Berkeley and the group of three at Lee Street for support during a research visit used to draft the paper. Last but not least, comments by Kate Purcell and Stephen Wood on an earlier draft have been extremely helpful.