The Economic Thought of Karl Polanyi 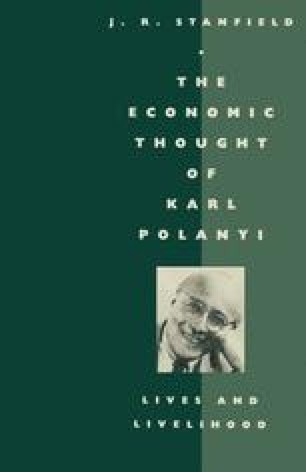 The Political Economy of Market Capitalism

As I indicated above, there is a further and most important dimension to Polanyi’s concern than the methodological problems of economic anthropology, economic history, and comparative economic systems. The economistic conception lies at the root of a paralytic gestalt which is fixated on the market form of economic organization. This institutional fixation does more than break down what should be the continuity between the analyses of past economies and comparative economic systems. It so delimits the vision of economic analysis that alternative institutional forms are not visible. This astigmatism similarly cripples the economist’s approach to public policy and social reform with the result that basic institutional change is unimaginable.

Political Economy Market Capitalism Market Economy Social Economy Protective Response
These keywords were added by machine and not by the authors. This process is experimental and the keywords may be updated as the learning algorithm improves.
This is a preview of subscription content, log in to check access.

4 The Political Economy of Market Capitalism