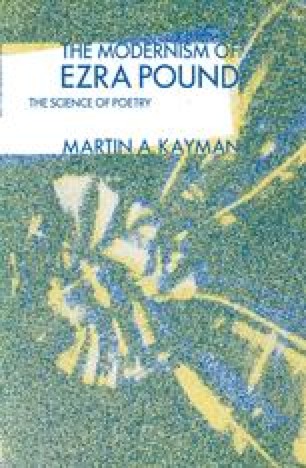 Introduction: Some of our Best Poets are Fascists

In 1934, Ezra Pound published a collection of essays entitled Make it New, including a long and important piece called ‘Cavalcanti: Medievalism’, which is subsequently dated ‘1910–1934’. Making it new out of the medieval: ‘I hadn’t in 1910 made a language, I don’t mean a language to use, but even a language to think in.’1 Pound had arrived in Europe in 1908, aged twenty-three, with a small collection of poems which he published privately in Venice under the title A Lume Spento. In London he produced selections from this work, adding new texts in a series of volumes: A Quinzaine for this Yule (1908), Personae and Exultations (1909) and Canzoni (1911), from which the title Personae was recovered in 1926 as the generic title for Pound’s collected shorter poems. Referring to the earlier Personae, Pound wrote in 1914 that it represented the beginning of a ‘ “search for oneself” ‘, for ‘ “sincere self-expression” ‘, a ‘search for the real’.2 The voices and techniques experimented with in his first works constitute, then, a double project for both a ‘language’ and a poetic ‘self, which then become the base for his collected shorter poems and the major work, The Cantos. His main resources in this first period (1908–11) were those writers discussed technically and historically in his Spirit of Romance (1910) — the Troubadours of Provence, the Tuscan poets, their contemporaries and successors: making it new out of the medieval.

Literary History Industrial Capitalism Eternal Truth English Verse Aesthetic Pleasure
These keywords were added by machine and not by the authors. This process is experimental and the keywords may be updated as the learning algorithm improves.
This is a preview of subscription content, log in to check access.