The End of Art Theory 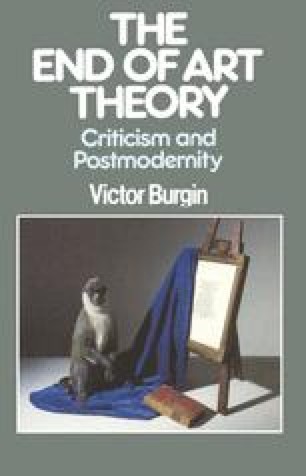 The Absence of Presence: Conceptualism and Postmodernisms

Chapter
Part of the Communications and Culture book series (COMMCU)

The ‘conceptual art’ of the late 1960s to early 1970s was an affront to established values, hostility to the new work being often so intense as to suggest that more than merely aesthetic values were at stake. Today the excitement has died down. Recollected in tranquillity conceptual art is now being woven into the seamless tapestry of ‘art history’. This assimilation, however, is being achieved only at the cost of amnesia in respect of all that was most radical in conceptual art. I want to say something of what I believe has been repressed in the almost universal tendency, in the art world of the 1980s, to ‘lose’ an entire decade — the 1970s — as a period in which ‘nothing happened’. As what characterises the present moment in the art world is a certain notion of ‘post-modernism’, now being used to support a wholesale ‘return to painting’, then I shall address my remarks to these issues. In order to show you these objects from my own vantage point, however, I shall have to pass by way of some history and theory which may at times appear to be leading nowhere in particular. I ask for your patience, there is no other route.