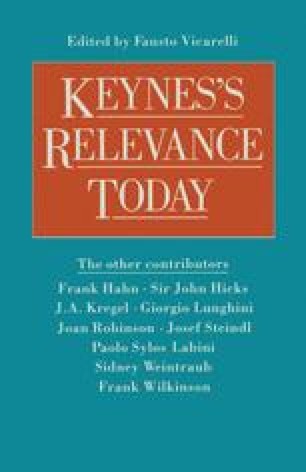 What was it that Keynes stood on its head in economics? Perhaps an idea of it can be conveyed in simple words. The analogy between the individual household and society as a whole which many economists as well as laymen use in their reasoning is misleading. Conclusions drawn from this analogy, Keynes showed, are false. Thus for the individual household saving (spending less than one’s income) leads to an accumulation of assets. For society as a whole when people spend less they reduce each other’s income and the wealth of society is reduced. That for the economy as a whole the relations are different, that spending determines income and not the other way round, is not immediately accessible to common sense which bases itself on the day by day experience of the household. The truth of the matter is revealed only by studying the circular relations in a society (spending-income-spending). This shows that there are feedbacks which for the individual household or firm are unimportant because of its small scope but which for a large unit, such as for example the public sector, will be very important. In economics as in other fields the scope of reasoning is enlarged beyond the field of everyday experience and intuition and produces results in flat contradiction with it.

Foreign Investment Real Wage Private Investment Full Employment Bretton Wood System
These keywords were added by machine and not by the authors. This process is experimental and the keywords may be updated as the learning algorithm improves.

Acknowledgements are made to Dr Alois Guger and Dr Ewald Walterskirchen of the Austrian Institute of Economic Research for helpful comments and discussions.