The Principles of Policing 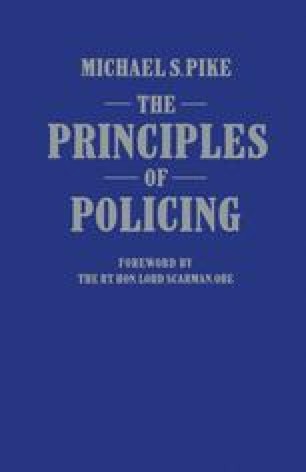 The Principle of Minimum Force

The principle which embodies the minimum use of force became firmly established with the creation of the modern police system in 1829. The circumstances of crime and disorder which provided the impetus for police reform during the latter half of the eighteenth century and the early nineteenth century have already been described. It was essentially a conflict between those who viewed the imposition of a police force on the population as an assault on liberty and those who recognised that the establishment of a police system was the only way in which liberty could be preserved. This conflict arose largely because of public ignorance of the way in which the law operated within society and, particularly, of the way in which the law could be enforced. Lawlessness and disorder had prompted more restrictive laws and severe penalties but these had had little impact on the problem.

Police Officer Police Force Royal Commission Coercive Power Minimum Force
These keywords were added by machine and not by the authors. This process is experimental and the keywords may be updated as the learning algorithm improves.
This is a preview of subscription content, log in to check access.