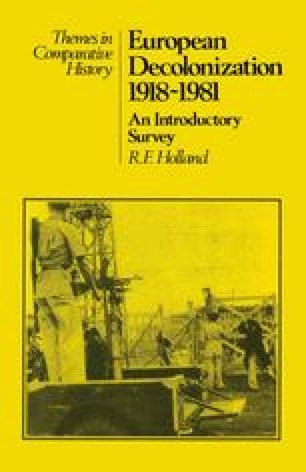 Order and Chaos: Patterns of Decolonization in French and Belgian Africa

This introductory outline of European decolonization has, up to this point, discussed African developments solely with reference to colonies which were either directly ruled by British administrations as Crown Colonies, or were self-governing entities within the British Empire-Commonwealth (the latter cases being those of South Africa and Southern Rhodesia). This by-passing of French, Belgian and Portuguese Africa is glaring given the vast physical extent of the territories involved, and to a somewhat lesser extent, their significant population sizes. The omission, however, is explained by the focus of our study: the dilemmas posed by social and political change were defined earlier and with a much greater degree of sharpness in British Africa. In the Portuguese dependencies, indeed, such a gradual destabilization did not become detectable until after 1960, and did not become acute until after 1970; our brief treatment of this is left until Part V. It was during the 1950s, nevertheless, that French and Belgian colonialism became vulnerable to those forces of change which had long been visited upon their British counterparts. The three significant components of this story which require our attention are events respectively in French West Africa, Algeria and the Belgian Congo.

6 Order And Chaos: Patterns of Decolonization in French and Belgian Africa