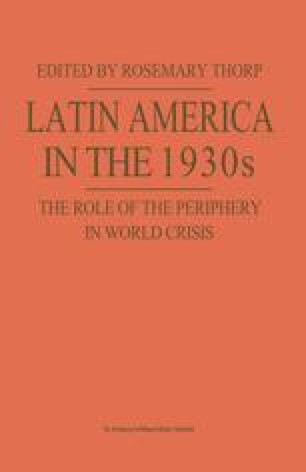 Argentina and Brazil during the 1930s: The Impact of British and American International Economic Policies

The accumulation of recent work on the impact of the 1929–33 Depression on specific Latin American economies provides an adequate basis for serious comparative studies trying to detect cross-country reactions in terms of shifts in economic policy and their results as well as to define homogeneous groups of countries in terms of economic performance.1

Foreign Exchange Bargaining Power Bilateral Trade Trade Imbalance Import Bill
These keywords were added by machine and not by the authors. This process is experimental and the keywords may be updated as the learning algorithm improves.

Paper presented to the 44th International Congress of Americanists held in Manchester, 5 to 10 September 1982, in a symposium organised by Rosemary Thorp on ‘The Effects of the 1929 Depression on Latin America’. A preliminary version was presented in a workshop held in St Antony’s College, Oxford, 21 to 23 September 1981. Participants are thanked for their comments. The author also thanks: Rosemary Thorp for her invitation to attend both events, Gelson Fonseca Jr and Winston Fritsch for their comments in Brazil, Ricardo Markwald for help in obtaining Argentinian publications, CAPES — Coordenação do Aperfeiçoamento do Pessoal de Nível Superior and IDRC — the International Development Research Centre — for financial support. The views expressed in this paper are those of the author alone.