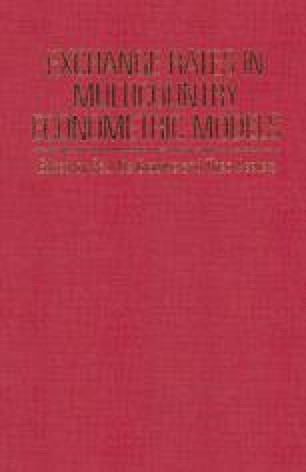 Project LINK is at once a global multinational model, a cooperative international research project, and a forum for research on aspects of international linkages. In the latter connection, papers on exchange rate models have been presented at past LINK meetings by Amano (1977), Armington (1976), Basevi (1980), Beenstock (1979), Helliwell (1979), Ranuzzi (1980), Sawyer (1980), and Weinberg (1977). This paper, however, is limited to a survey of the way in which exchange rates are determined in those national models included in the present LINK system for which rates are endogenous and to the multinational exchange-rate equation systems which have been estimated and simulated at LINK Central under the direction of Lawrence Klein. Interactions of exchange rates and other real and financial variables in the LINK models are also discussed in later sections.

Exchange Rate Current Account Money Supply Purchase Power Parity Trade Balance
These keywords were added by machine and not by the authors. This process is experimental and the keywords may be updated as the learning algorithm improves.
This is a preview of subscription content, log in to check access.