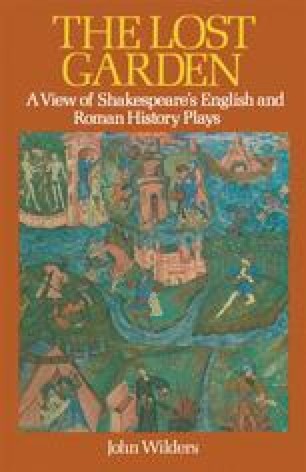 History as Shakespeare portrays it is determined either by the simple kind of fortune, or ‘chance’, which intervenes chiefly in war or by the more complex fate, or ‘destiny’, which operates through a combination of characters, as in the psychological conflicts which precede the deposition of Richard II or the assassination of Julius Caesar. Many of Shakespeare’s politicians attempt to control the otherwise arbitrary effects of fortune by the exercise of a Machiavellian ingenuity which gives them mastery over their fellow-men, but even if, like Henry IV or Henry V, they are successful for a time, they are still helpless in the face of old age and death which reduces them and their achievements to nothing. The minor characters in the history plays, such as Iden, the Lord Mayor and citizens of London, Cinna the poet and Cleopatra’s waiting-women, vividly create a sense of the nation whose history is being depicted, but their fates depend upon those of the people who govern them.