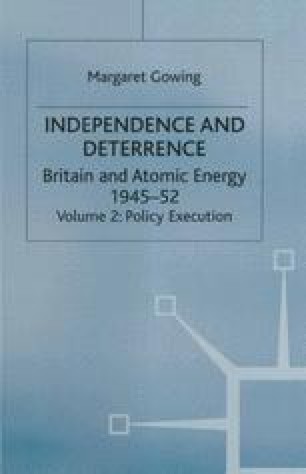 The Monte Bello bomb was terrifyingly real and could be measured in terms of blast and radioactivity by the monitoring machines spread about the islands. Yet it was also curiously unreal. The initial product of the huge industrial effort was just two lumps of an ordinary-looking heavy grey metal, no more than one man could carry by hand on the journey to Monte Bello. One of these lumps, encapsulated in its shapes of high explosive, had produced, in a microsecond of activity, a soaring plume and mushroom cloud laden with lethal contents, and a blast equal to that of 20,000 tons of TNT. The whole and acknowledged point of the bomb and its successors was that they should not be used except in tests. They were symbols of intent and determination. If they were used, they had failed in their purpose, which was deterrence. If two sides used them in warfare, any victory was bound to be pyrrhic.

Power Reactor Atomic Energy Alpha Particle Atomic Weapon Beta Decay
These keywords were added by machine and not by the authors. This process is experimental and the keywords may be updated as the learning algorithm improves.
This is a preview of subscription content, log in to check access.