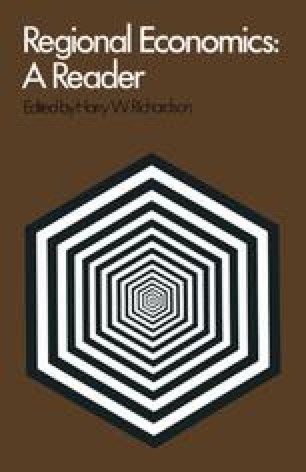 Interregional Variations in Cyclical Sensitivity to Unemployment in the U.K., 1949–1964

In an earlier article one of the present writers showed that over the period 1949 to 1964 some administrative regions of the United Kingdom were more cyclically sensitive to unemployment than others. A region’s cyclical sensitivity to unemployment was calculated by regressing the first differences of its rate of unemployment for May of each year (y) on the first differences of the corresponding rate for the U.K. (x). The regression coefficient (b yx ) for each region was taken as its measure of sensitivity. Regions for which b was greater than unity were defined as cyclically sensitive to unemployment, and regions for which b was less than unity were defined as cyclically insensitive. It was noted that the sensitive regions, with one exception, were ones with annual rates of unemployment persistently above the national average, and that the insensitive regions, also with one exception, were ones with annual rates persistently below the national average.1

Industrial Structure Regional Weight Regional Dispersion Difference Term National Weight
These keywords were added by machine and not by the authors. This process is experimental and the keywords may be updated as the learning algorithm improves.
This is a preview of subscription content, log in to check access.