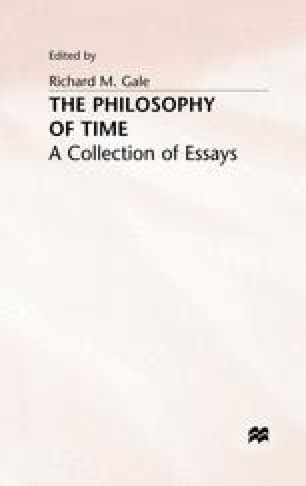 The Static Versus the Dynamic Temporal

This section will consider the treatment of time in twentieth-century analytic philosophy, this being a generic term which includes logical atomism, logical positivism, rational reconstruction, and linguistic analysis (ordinary language philosophy). We shall begin our investigation by considering J. M. E. McTaggart’s famous argument for the unreality of time, which was first published in 1908. McTaggart’s discussion is a key to the views of time held by twentieth-century analytic philosophers, for one can detect in their writings a common underlying concern: almost all of them are attempting to answer McTaggart’s paradox. This is not to say that all these writings mention McTaggart by name, or even that their authors always had him consciously in mind; but only that the problems they wrestled with were those bequeathed to them by McTaggart. A person can scratch a mosquito bite without knowing that it is a mosquito bite. McTaggart’s argument is fallacious, but it is fallacious in such a deep and basic way that an adequate answer to it must supply a rather extensive analysis of the concept of time, along with a host of neighboring concepts that are themselves of philosophical interest, such as change, substance, event, proposition, truth, and others. What we shall notice is that the answers proposed involve very different analyses of these concepts.

Dynamic Temporal Qualitative Change Temporal Relation Temporal Fact Ordinary Language
These keywords were added by machine and not by the authors. This process is experimental and the keywords may be updated as the learning algorithm improves.
This is a preview of subscription content, log in to check access.