Economic Consequences of the Size of Nations 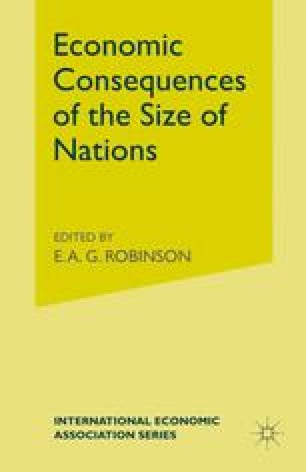 Size and Viability: The Lesson of Austria

There is hardly any country in the world where the problem of size and its economic significance has met with such widespread interest as in Austria between the two wars. This was not due to a particular smallness of the country. With its (at present) 7 million inhabitants it is far from standing at the end of the queue when the nations are lined up by size.1 Nor can it be said that Austria is particularly poorly endowed by nature. With timber and iron ore, with sufficient water for extensive hydro-electric projects, and with a variety of other resources and of human skills, Austria does not compare badly even with a well-to-do country like Switzerland, and certainly comes off far better than many other small countries where the question of ‘economic viability’ has never been raised.

Small Country Austrian Economy Export Volume Dynamic Adjustment Habsburg Monarchy
These keywords were added by machine and not by the authors. This process is experimental and the keywords may be updated as the learning algorithm improves.
This is a preview of subscription content, log in to check access.