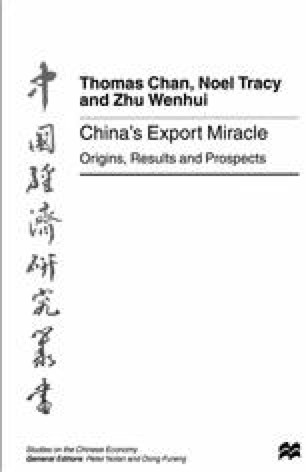 The Future of China’s Exports in the World Market

By the mid-1990s, China had firmly established itself as one of the world’s leading trading nations. By 1995 its international trade had topped US$280 billion, a figure that must have seemed unreachable to the architects of the economic reform process in the late 1970s. China’s growing prowess in world markets was evidenced by a trade surplus in that same year of US$16 billion and by a further surpluses of US$12 billion in 1996 despite the slowdown in export growth and US$40 billion in 1997. Reserves of foreign currency mirroring the trade performance had grown to US$80 billion,1 while in every year since 1992, China had been the largest recipient of foreign capital among developing countries. In 1995, even this was surpassed when it became the second largest recipient of foreign capital in the world, trailing only the United States. World Bank and IMF predictions that China would be the largest economy in the world by 2015 not only began to look realistic but also possibly even conservative. Judged by this data, the momentum of China’s incorporation into the international economy has looked almost unstoppable. This is, however, far from the complete picture and a look beyond the raw data suggest a number of storm clouds are gathering for the Chinese economy and its place in the world economy.

Domestic Firm Trade Deficit Coastal Province Trade Surplus Export Industry
These keywords were added by machine and not by the authors. This process is experimental and the keywords may be updated as the learning algorithm improves.
This is a preview of subscription content, log in to check access.