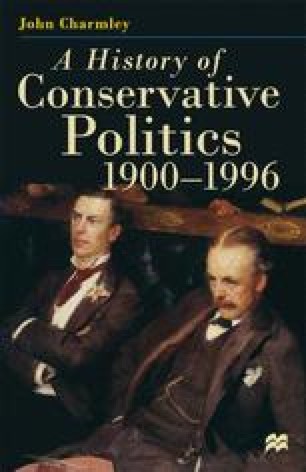 The Conservative Party exists to conserve; it is the party of the status quo. Unfortunately for it and its adherents all things change — ‘the flower withereth and the grass fadeth’. In another world perhaps these things are restored and made new, but in this world the process of change poses a fundamental challenge to Conservatism as a political force. Many of those who vote Conservative do so because of a visceral distaste for the consequences of change, but for a Conservative Party some accommodation with this process is inevitable — if only to ensure political survival. There is, then, a tension between instinctive Conservatism and expediency. Because of this, all Conservative leaders have faced charges of opportunism and betrayal; historians generally judge them by their success in adapting to change. Since the Conservative Party has existed for more than 150 years, during which time Britain has changed beyond recognition, historians are agreed that the Party has been a great success; visceral Conservatives are less easily convinced.