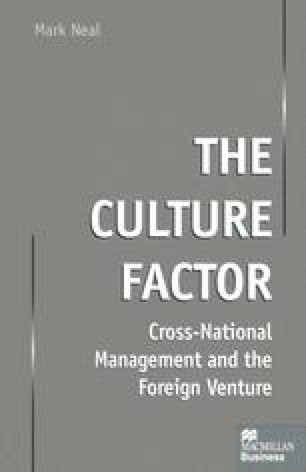 Since the conception of international management studies there has been a debate about those social factors that influence the nature and effectiveness of management in different countries. Much of this debate has been concerned with the influence of national culture. Early writers such as Kerr et al. (1960) and Harbison and Myers (1960) played down the culture factor, claiming that industrialism was leading to a convergence in patterns of organisation, and the elimination of significant national cultural differences. Other writers, however, stressed the pervasive and persistent nature of national culture and its influence upon organisational systems, attitudes and activities: Oberg (1960) identified the practical problems the culture factor posed for the management of international organisations; Farmer and Richman (1965) characterised national culture as a critical environmental constraint upon the nature and efficiency of multinational companies; and Haire, Ghiselli and Porter (1966) identified significant differences in the way common organisational concepts were understood and used in different countries.