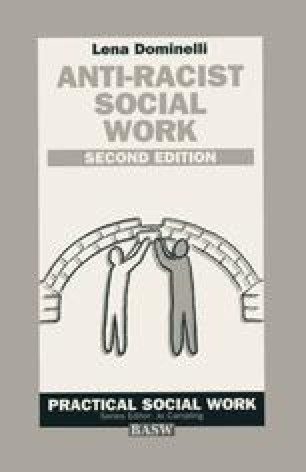 Social work educators have done little to challenge the racism inherent in their theories and practice. Although it had published several documents on the matter, the Central Council for Education and Training in Social Work (CCETSW) had failed to incorporate anti-racist measures as a compulsory part of the curriculum until the introduction of the Diploma in Social Work (DipSW) in 1990. This requirement has been highly controversial and poorly enforced. CCETSW’s attempts to provide guidance on anti-racist social work in the form of publications written by the Northern Curriculum Development Project has backfired by prompting a backlash (see Pinker, 1993; Dunant, 1994; Phillips, 1993). By the mid-1990s, the backlash had led to the removal of Appendix 5 from Paper 30 and the disbanding of the Black Perspectives Committee. Academic disciplines are based on anglocentric models which take white British culture, history and achievements as the norm. Psychological theory and human development is considered largely in terms of the white British male standard. Discussions about the family centre on the white, middle class, heterosexual nuclear family as the favoured type. Variations from this are deemed ‘deviant’ and undesirable (Eichler, 1984; Lorde, 1984; Segal, 1983). Social policy is invariably British, glorifying white British processes and institutions.