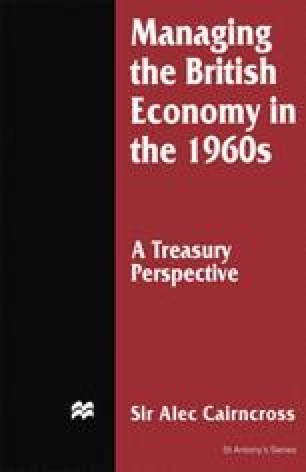 The Chancellor of the Excheque when I took up my duties in the Treasury on 5 June 1961 was Selwyn Lloyd. He was a lawyer by training, with no knowledge of economic theory and little experience of economic policy; shy and rather diffident in discussing matters where he felt himself at a disadvantage in expertise, and at the same time distrustful of would-be experts. He had no ready flow of language, stuttering more than any Minister I have known, and was given to taking up the time of his officials in long meetings to draft speeches and memoranda. On the other hand, he did not lack boldness or originality and had firm ideas of his own. He had held senior office as Minister of Defence, and subsequently as Foreign Minister, and in June 1961 had been Chancellor for nearly a year.

Public Expenditure European Economic Community Income Policy Bank Rate Special Deposit
These keywords were added by machine and not by the authors. This process is experimental and the keywords may be updated as the learning algorithm improves.
This is a preview of subscription content, log in to check access.