A Guide to United Kingdom and European Union Competition Policy 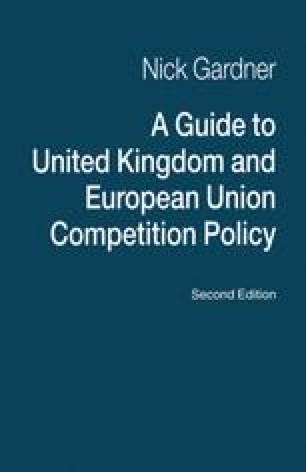 As the previous chapter has shown, the definitions of business practices which appear in EU and United Kingdom legislation are often framed in very general terms. Application of that legislation to individual cases consequently requires the exercise of discretion going far beyond that normally required of ordinary courts of law. The legislation accordingly made provision for the creation of special institutions which were given the duty to exercise such discretion within prescribed limits and according to stated procedures. Since the legislation was first introduced, those regulatory institutions have developed further procedures and practices of their own, and have at times assumed roles which were not specifically catered for in the legislation. This chapter concentrates upon those aspects of law and practice which appear significantly to affect the conduct of the business of the regulatory authorities.

Member State Fair Trading Competition Policy National Court Regulatory Institution
These keywords were added by machine and not by the authors. This process is experimental and the keywords may be updated as the learning algorithm improves.
This is a preview of subscription content, log in to check access.