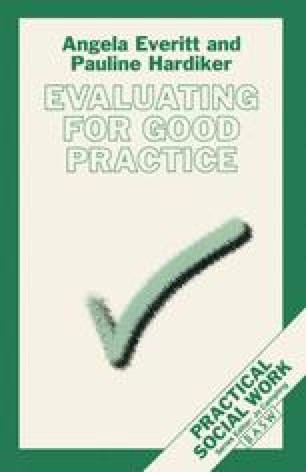 During negotiations that took place to set up the evaluation of the arts project in elderly persons’ homes, the arts workers, and particularly the dance-and-movement worker, were very concerned that the external evaluator should not do what they thought of as a ‘scientific’ evaluation on them. This was not expressed as a reluctance to be evaluated. Far from it. The project, a voluntary one dependent on funding from both charitable sources and the local authority, was anxious to fulfil the evaluation requirement that was part of the condition of funding. But more important than that, the arts work for older people in residential care was established as a demonstration project and the workers were keen that it be evaluated so that learning from it could be captured and disseminated. The arts workers were convinced that their contribution improved the quality of living in residential care. They were committed to what they were doing, even passionate. It was thus important that the evaluation provided a way for their assumptions about the effectiveness of their work to be scrutinised.