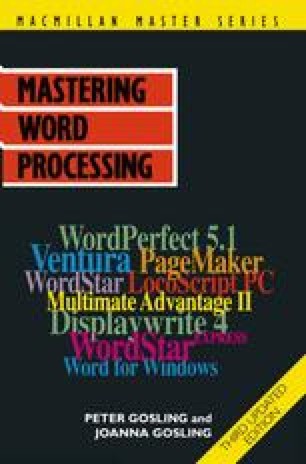 The first versions of LocoScript were, and still are, supplied packaged with all Amstrad PCW 8256, 8512, 9512 and 9526 computers. It is supplied on side 2 of the disk that contains the CP/M PLUS operating system. However, the program proved to be so popular that a version to run under the MS-DOS operating system was produced so that it could be used on any IBM PC or compatible microcomputer. By providing this new version it has become possible for users, particularly people such as freelance writers, to transfer their PCW based LocoScript files onto the more powerful PC type of machine and carry on using them with a word processing program that works exactly the same as the one they were used to. The most efficient way of doing this is to use the special LocoLink cable that connects a PCW machine with a PC and transmit the documents from one to the other. A certain amount of editing will need to be done at the PC end because the two programs, although very similar, are not identical in every way. Apart from this the document conversion is automatic.