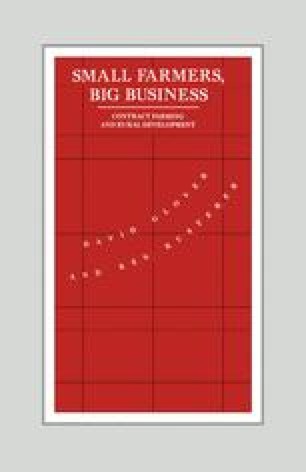 In the late 1970s, the third of a series of military governments that since 1968 had promoted socialist agricultural reform in Peru was running out of steam. Export earnings from fish and minerals, principal supports to the Peruvian economy, were down and the government could no longer afford to subsidize the agricultural production cooperatives which were attempting to continue large scale farming on the expropriated estates of their former employers. Harvests had declined and, as a result, years of unpaid loans overhung the farm collectives, demoralizing their members and decreasing the willingness of even governmental credit institutions to continue providing new loans.

Small Farmer Family Farmer Field Staff Collection Centre Farm Woman
These keywords were added by machine and not by the authors. This process is experimental and the keywords may be updated as the learning algorithm improves.
This is a preview of subscription content, log in to check access.