Capital Markets in the Development Process 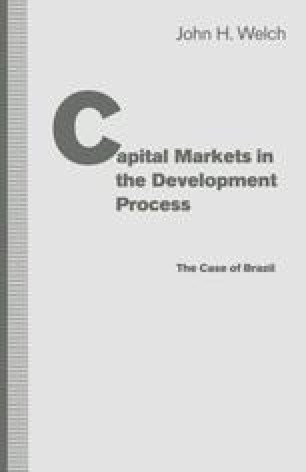 Capital Markets in the Development Process pp 67-90 | Cite as

The financial reforms initiated in 1964 had three basic objectives: (1) improve allocative efficiency of capital markets, (2) design an institutional structure which would allow the implementation of selective credit policy, and (3) establish institutions that would facilitate inflation stabilisation. In many instances, these objectives were not mutually compatible. For example, creating strong primary and secondary markets for equities is difficult in the face of restrictive monetary policy. Further, selective credit programmes made, at times, anti-inflationary monetary programming difficult, if not politically impossible. In other cases, the initial measures did not achieve the original objectives and stronger measures were implemented. This chapter outlines the initial objectives of the reformers, the initial reforms, and the resulting structure of the financial system.

Private Sector Capital Market Financial System Commercial Bank Monetary Authority
These keywords were added by machine and not by the authors. This process is experimental and the keywords may be updated as the learning algorithm improves.
This is a preview of subscription content, log in to check access.