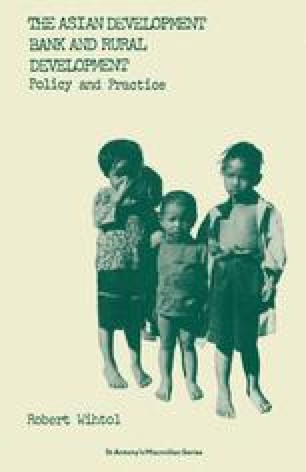 Betweeen 1967 and the mid-1980s the ADB’s development policy for the rural sector, as reflected in the two Asian agricultural surveys prepared by the Bank and the resulting policy papers, underwent fundamental changes. The Bank’s initial policy of modernising agricultural production, mainly through investment in irrigation, agricultural inputs and seed varieties, was thoroughly revised in the mid-1970s, leading to the emergence of a rural development policy emphasising that increasing production should be accompanied by substantial measures to create employment and promote a more equal distribution of rural incomes, and drawing some attention to the question of land reform. Within the broad classification of rural development strategies suggested by Griffin, and to the extent that such a classification for national policies can be applied to an international agency, the ADB moved from a technocratic strategy to one with considerable elements of reformism.1 The policy change can largely be explained in the light of the 1972–4 food crisis and changes in the rural development policies of the World Bank and the international donor community, and received particularly strong endorsement from the Bank’s smaller donors and the Carter administration in the US.

Rural Development Operational Policy Vote Power Land Reform Bank Lending
These keywords were added by machine and not by the authors. This process is experimental and the keywords may be updated as the learning algorithm improves.
This is a preview of subscription content, log in to check access.