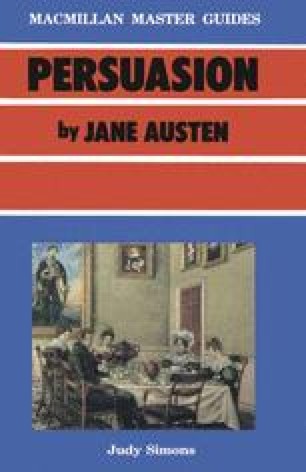 Persuasion was published together with Northanger Abbey in a four-volume set in December 1817, in an edition that included a ‘Biographical Notice of the Author’ by Jane Austen’s brother, Henry. The book took Jane Austen just twelve months to write, and it was completed in the August before her death. We know that she re-wrote the ending of the novel substantially. The original version omitted the climactic proposal scene at the White Hart Inn, and contained instead a scene at the Crofts’ lodgings in Bath, where through a series of blunders on Admiral Croft’s part, Wentworth and Anne are left alone together to declare their love. Clearly Jane Austen was unhappy with this first version, which tended to emphasise the comic elements in the lovers’ situation, and in writing the concluding section in its final form, she created a fresh extra chapter, which developed Anne’s role, included her conversation with Harville about woman’s constancy, and allowed greater scope for the crucial analysis of the past. The novel now became a two-volume work, with twelve chapters in each volume.