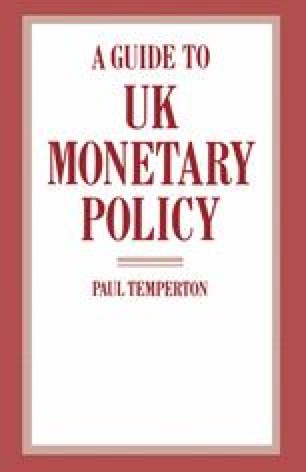 Monetary Targets in the UK

The first monetary targets in the UK were set in the mid 1970s: these were informal, specifying guidelines and anticipated outturns for broad money growth and domestic credit. In the Budget of 6th April 1976, Denis Healey (Chancellor of the Exchequer) said that ‘after two years in which M3 has grown a good deal more slowly than money GDP, I would expect their respective growth rates to come more into line in the coming financial year’ (implying unchanged velocity, see below). Later on in the year, statements about the expected behaviour of the monetary aggregates became more definite. According to Fforde1 ‘the UK authorities had become caught in a spiral of declining confidence’ in 1976. Exchange rate weakness, coupled with a continuing concern about the government’s fiscal stance and the size of the PSBR, led to concern about the viability of the government’s incomes policy (and, hence, future inflation).

Exchange Rate Interest Rate Balance Sheet Short Term Interest Rate Monetary Aggregate
These keywords were added by machine and not by the authors. This process is experimental and the keywords may be updated as the learning algorithm improves.
This is a preview of subscription content, log in to check access.