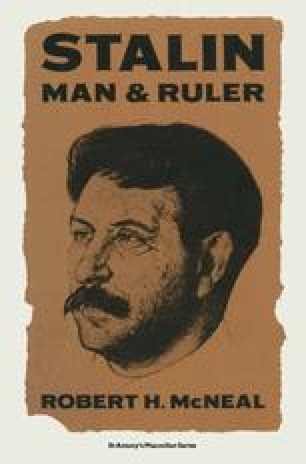 Stalin’s seventieth birthday, which fell on 21 December 1949, was the high point of his claim to earthly immortality. Because praise for Stalin had been so profuse for so long, it was not easy to make the birthday a strikingly distinctive occasion, but the propaganda machine, co-ordinated by a committee of seventy-five dignitaries, including the Politburo, Lysenko and Shostakovich, rose to the challenge. The ‘stream’ (Pravda’s word) of greetings flowed on until 14 August 1951, published at the rate of a couple of hundred per day almost every day during those years. Poesy flourished in countless tongues, the Union of Soviet Writers offering a purportedly collective inspiration, concluding with an implied allusion to the role of the bow in Orthodox ritual:

For all, for all, receive our bow;

As the hearts’ duty, as a mark of the people’s love;

From all the republics of the free Motherland,

From all free nations and tribes —

From all, from all, a filial bow to You!1

Central Committee Party Congress Soviet People Party Unity Foul Play
These keywords were added by machine and not by the authors. This process is experimental and the keywords may be updated as the learning algorithm improves.
This is a preview of subscription content, log in to check access.